My previous backpacking, 2-person tent was an older Swiss Gear model. It served me well for many years, but after using this tent, I’m kicking myself for not upgrading years ago. It has a lot of really nice design features. The set up was very easy and fast. The aluminum poles (which seem pretty high quality) slide into continuous sleeves that ‘dead end’, so you only have to deal with inserting one end of the pole into a grommet, instead of both ends. This makes it easier for a one person set up. Some extra plusses are the pole storage bag has extra reinforcement on the bottom to prevent tears, and a pole repair sleeve is also included. My only complaint with the poles is that the short overhead pole has a couple of ball-n-socket type of attachment points, and the instructions aren’t real clear on how it works. Not a huge issue as I was able to figure out that the ball part snaps into the socket. The 2 overhead poles provide a lot a head room, and also appear to raise the roof to assist with rain runoff (it didn’t rain when I used it). There are a lot of vents, so controlling airflow was easy to stay comfortable, and greatly reduce condensation. Many pockets and loops inside for storage and hanging of gear. The rain fly attached easily and provided a nice tight fit. Guy lines were included, but the fly fit so well, I’m thinking the lines would only be needed if really bad windy weather was predicted. A minor complaint that no extra stakes were provided for the guy lines. Overall I am very happy with the design and quality of this tent.


Very happy with the Arete - double walls keep body heat in. Low teens on recent trip to Gila Wilderness but much warmer inside. Easy set up and very stable in wind. Heavy at about 5.5 pounds but worth it in cold and win. Haven’t tested in rain. 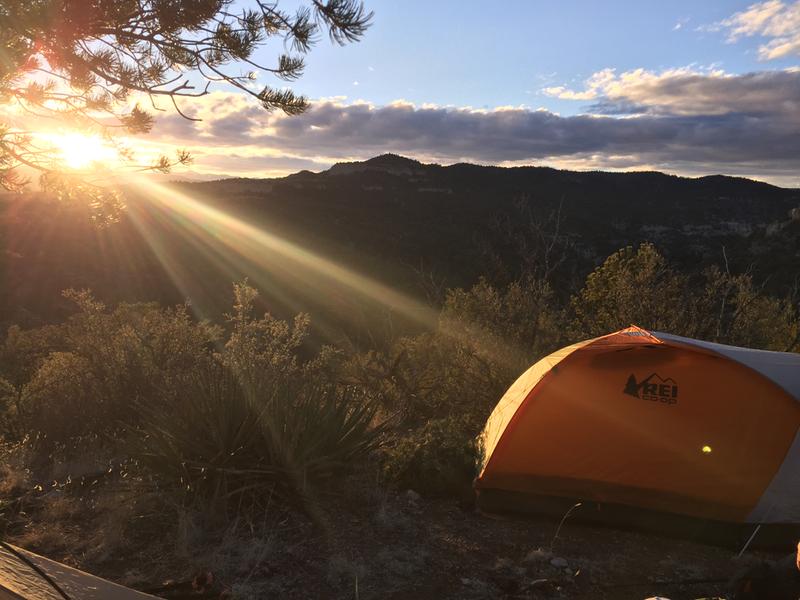 I have the previous version of this tent, and note that most all of these reviews are from people who have been provided a free product! NOT unbiased. Overall, a very good tent, but be aware that inadequate line and tent stakes were provided to do a secure set up. REI should have included these extras at this high price point, but chose not to for some reason, perhaps to make more money/profit?


Really like the design of the Arete ASL 2 - the unique four pole architecture provides optimal space, especially regarding head room and a large entry area/door. Like most two-person tents, I find it more suitable as a spacious and roomy option for one (though it adequately fits the bill for two people if so inclined). I took the tent out on two occasions over the past month, and the Arete will now be my “go to” tent for solo camping. I found the set-up easy, and especially liked the pocket ends for the poles which speeded up the set-up process (the color coded poles/sleeves eliminate any question about what goes where). The first trip out with this tent was for a single warm, calm, and uneventful night. The ventilation in the Arete was adequate and I experienced no problems. The second outing was for a couple of nights, and on the second night the Arete was tested with a brief thunderstorm that brought high winds and rain. I had the tent and rainfly completely staked out as potential severe weather was in the forecast. The Arete handled the adverse weather superbly! The tent hardly moved in the wind (the structural design is superb) and no leaks were noticed. I was extremely pleased with the performance of the tent. The tent also has many additional features including storage pockets and loops, adjustable vents (with access through zippered window), reflective trim, and a spacious vestibule area. My only wish is that the Arete also came in a three-person design, as that would be the ideal two-person tent space. All in all, the Arete is the best two-person tent design that I have experienced...


I bought this tent to replace an Alps Mountaineering 2-person, 4-season tent that I also bought at REI. There isn't really anything wrong with my old tent; I just don't love it because with the rain fly on, the tent has both a front & rear vestibule which makes it very long on the ground. It is also heavy (almost 9 lbs), although that doesn't matter too much to me because I use my tents for motorcycle camping, not backpacking.


The tent poles are too long to pop into the grommets, without EXTREME extended pressure, which really hurts the hands! I totally agree with the other reviewer (SunDay - nickname) and his observations. This tent has seen three iterations as far as I know. I had the original one, but returned it after the zipper repeatedly failed. I then, perhaps unwisely, opted to try the newly redesigned and improved model (second iteration). I have only used it once, and the two poles are definitely too long, making grommet insertion next to impossible (and I am a six foot bodybuilder - imagine a small lady attempting this!). Bringing all my strength to bear, it required a lengthy battle, and I honestly said to myself there is no way I can get this pole inserted (and yes, I did again verify that the pole was all the way through the pole tube and up snug against the other end). Then my ego kicked in, refusing to admit defeat, and with a huge burst of strength, I got it in the grommet ... but my hands and fingers were extremely painful by this point! To get the poles out, I could not use my hands, but had to place my boot just inside the pole, and hold the grommet cloth in place while I pulled the pole from above the grommet. This was not on the current blue and white redesigned model, but the one that preceded it, so it seems this problem is cropping up still. The tent is a good tent, and totally waterproof (it rained hard that night), but this pole length issue is a painful one (literally). Hopefully these two reviewers had flawed versions that not everyone else is getting - an error in manufacture only occasionally occurring.


Being new to camping I wanted something easy to set up and this certainly is. I had it up in less than 10 min the first time. Very much looking forward to some solo camping adventures with it!


I purchased this for a backpacking trip in a windy area. The tent worked great, though it was not windy on that trip. The problem is, the next time I needed this particular tent (4 season), two years had passed. I pulled it out of the bag and the rain fly was completely delaminated, sticking to everything....and REI has a one year return policy so I am out of luck. Paid $400 for a tent I got two nights use out of.


From what I understand this tent model was redesigned. If that is the case the new design is greatly flawed. The tent poles are too long for the tent sleeves (or the sleeves were cut and/or sewn too short) and couldn't get them into the grommets. It was late night in a chilly desert and there I was rolling around in the dirt like crocodile dundee wrestling a crocodile for a long time, trying to get the poles into the grommets so to have a place to sleep. A neighboring camper woke up and came to help me, but she couldn't get them in either. With both of of wrestling with the poles, we were just barely able to get them into the grommets. When the tent was set up the floor, near the door didn't lie flat on the ground, it was elevated because the floor fabric was too taut. It was immensely difficult to get the poles out of the grommet as well and I had bleeding fingers to prove it. Where was quality control on this one? And do they actually test out the products before putting them out on the floor? Of the two days I had to camp, you blew it REI. In theory this tent would be a gem, in reality, until they correct this terrible design flaw, DO NOT BUY. Got my money back, but wish I could also get a credit towards something else for that experience.


I've been a member for many years and my adult kids grew up wearing and using gear from REI. So it was natural to give my son, among other things, a tent from REI at graduation in 2011. The great warranty was persuasive. After a false start with a Half Dome, he chose an Arette 3.

Does this tent require pegs?

The rainfly should be staked out to form the vestibule. We recommend staking and guying out the rainfly, but other than the vestibule it is not absolutely necessary to stake in calm conditions.

Will this tent keep you dry sitting out a 24hr rain downpour? Thanks

​Yes, this tent will keep you dry in a long downpour.

Thank you for bringing this to our attention. We will update our tech specs as soon as possible.

Is it possible to pitch this tent with the fly already attached?

We suggest putting the rainfly on after the tent is completely pitched.

This tent measures 88” in length. There is plenty of room for someone who is 6’ 7” in this tent.

What is the square footage of the vestibule? Thanks,

What material is the rainfly made of? The features description says "30-denier high-tenacity polyester rainfly" while the technical specs say "Rainfly Fabric 40D nylon." Which one is correct? Thank you!

Thank you for bringing this discrepancy to our attention! The rainfly is constructed of 30D polyester. We will update our product description shortly.

How water proof is this tent? I plan to use it in the north west

This tent is designed to keep you comfortable and dry even in the wettest Northwest environments.​

Does this tent use DAC feather lite poles? If not which ones does it use.

Will the old Arete footprint fit the new Arete?

Due to the redesign of the Arete ASL 2, this not tent is not compatible with the footprint from the previous version.